skip to main | skip to sidebar

This is the first official Snacks in the city Post! I have been toying with the Idea of this blog for a while but have never started an article. Well finally an event occurred in my snack-dom that has out done anything in previous memory.
Anyone on the net or well... anyone living knows about the meat monstrosity called the KFC "Double-Down". Well I am a Pescatarian ( mostly vegetarian but I include fishes in my diet) and this meat medley was not in the cards for me and really I had no desire for it. Well yesterday, Jason (my boyfriend and also pescatarian) was sneaking around the grocery store picking out peculiar items such as; 2 bricks of cheese, veggie chicken patties and fake bacon etc.... I think that you all are starting to get the picture. When I questioned him about this crazy idea.... he told me "Hey we deserve to dream too, don't we."
So this afternoon we had a super deeelish Vegetarian double down. OMG we both wanted another!

Here are some pics! 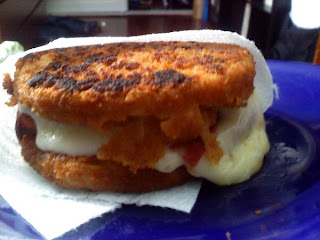 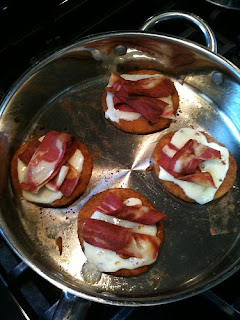 omnomnom of the week!!! 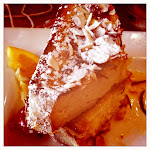 Click pic for the creator of this master piece!!!!

these are not a waste of time